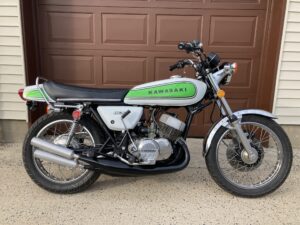 This H1 500F is stunning. Showing just under 3400 miles, it looks and rides as you would expect. Amazing sound from the 2 stroke with Factory Pipes exhaust being the only modification. Stored indoors and well cared for, this Kawasaki is sure to please. A secure investment, financially and for the fun factor. 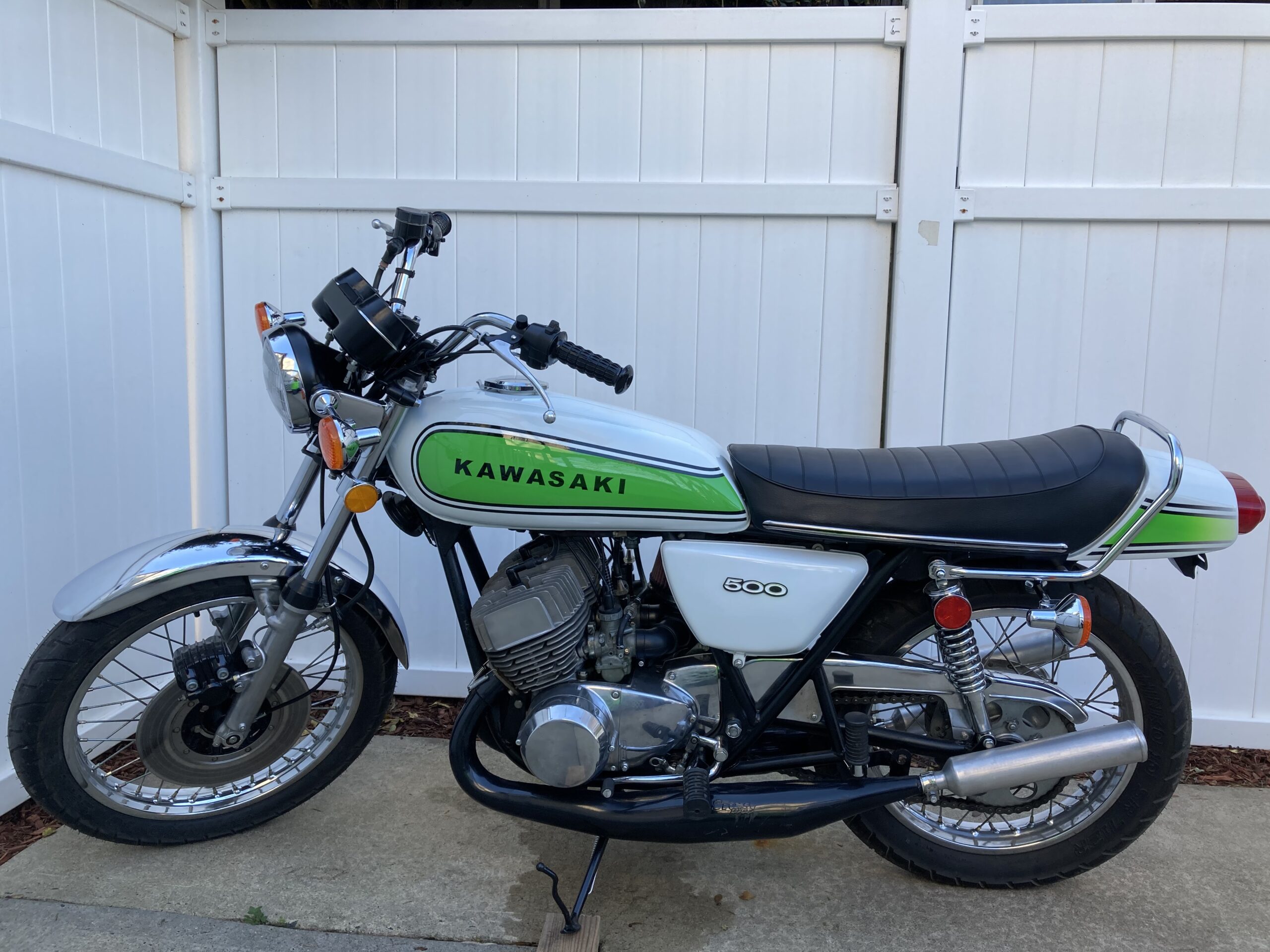 “While Kawasaki was working to “make the H1 acceptable in civilized society”,  the Mach III H1 500 subsequently has been of great interest to collectors and historians of motorcycles, often appearing on lists of most significant motorcycles. The H1 was included in the Guggenheim Museum’s 1999 The Art of the Motorcycle exhibition in New York, Chicago, Las Vegas, and Bilbao, Spain. Motorcycle historian Clement Salvadori noted in the Guggenheim’s catalog that the H1, “was one of the least useful motorcycles available on the market” yet still sold very well because, in the heyday of American muscle cars where quarter mile times were paramount to the young male target buyer, it “could blow just about anything else off the road. Motorcycling author and journalist Roland Brown wrote that it could “beat almost anything away from the lights.” Salvadori added that “Motorcycle lore has it that very few original owners of the Mach III survived.” While older Baby boomers collected classic brands of the 1950s and 1960s like BSA, Norton and Triumph, a younger generation of motorcycle collectors was nostalgic for the H1 Mach III.”

This makes the Kawasaki H1 an investment grade motorcycle. Values have been steadily increasing and we believe this one to be a solid investment in fun and finance. This particular example came from estate sale in North Carolina and is said to be a numbers matching H1. It is believed to be an original 3365 mile bike that had its tank, covers and rear cowl painted 20 years ago, probably before accurate reproduction decals were available, as this is evident in the non-Kawasaki style font on the tank. However, the paint is in astounding condition, which makes the decision to correct this, would be a difficult one.

The chrome is all in excellent condition along with the rims and spokes. Frame appears to have original paint and wiring and plastics seem original as well. Tires are excellent as are shock tubes and single front disc brake and rear drum. The vintage grips are perfect as well as all lights and reflectors. The vinyl seat is in perfect shape too. Tank and gauges are clean and warning lights all work.  It has the original Mikuni triple carburetors, but an after market “Factory” exhaust system. Starts on the second kick cold and the first kick warm. Again, a great investment in fun, a gorgeous bike and a must have for any collector.

Auction failed because there were no bids