One of the most delightful oddities of the EICMA 2019 motorcycle show in Milan is a step closer to production. The Aston Martin AMB001, built in partnership with a resurrected Brough Superior brand, has begun its dynamic track test program at Pau-Arnos in France.

Doesn’t November last year feel like a lifetime ago? What a different world we lived in back then. We’re lucky the motorcycle world managed to pile so many weird and wonderful bikes into EICMA 2019, because lord knows when the industry will get another chance to put so many people in one place and show off ideas.

One of the stars of the show was the AMB-001, designed by the creative team at Aston Martin and powered by a turbocharged version of Brough Superior’s 997cc V-Twin engine, complete with intercooler, tuned for a meaty 180 horsepower. With a weird finned “spine” running down the middle and single-shock Hossack-style front suspension to go with its weirdly domed nosecone and supercar-style splitter wing, it’s certainly a fascinating thing to look at.

Designed for track use only, it’s a limited edition with only 100 examples set to be built. Now it’s out on track doing its thing in the preliminary stages of testing, and Aston has been kind enough to provide photos and video. 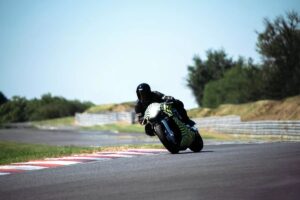 It’s not going all that fast, particularly for something focused on the track, and Aston in all its wisdom has chosen a boppy music track and laid it over the audio so we can’t hear the engine sound. What’s more, the bike is covered in pre-production camouflage. But it definitely has a sporty look to it, even if it’s never going to trouble the lap times of a much cheaper production supersport bike.

Once these tests are complete, a tweaked version of the bike will go into production this Fall at Brough Superior’s factory in Toulouse, France. Two iconic British brands, manufacturing in France? It sure is a whole new millennium.